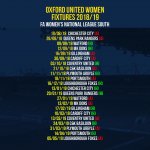 Posted this in OUFC matches ...Admins: would it be worth having seperate OUFC Ladies 'section' ... and .maybe OUFC U23 , and OUFC Youth sections?

Quite fancy watching those Loughborough Foxes

I've heard the club is setting up an over 50's wimmin's team - the Cherwell Cougars.

I'm excited for the new season.

In terms of scheduling it's roughly what I expected. From the players' perspective it makes more sense to play the closer games - like Coventry and MK Dons - during the week rather than have long trips to Plymouth or somewhere like that. l wish our first game was at home, but will be travelling to the QPR game the week after. Uxbridge is less than an hour away on the train and surprisingly cheap (£16.30 return). My one complaint is that we're double booked (men's and women's) to play on September 9th. The only way I could watch both is if I skip the men's and watch it in the clubhouse before the women's game. Fecking Sky.

We had a setback and had to reset in a sense, but things are starting to come together and while there's still work to be done, we're heading in the right direction. I admit I'm not familiar with the league in terms of quality - it gets very little publicity compared to the top two divisions - but I'm still optimistic about next season. We've managed to retain a good core group; we just need to add a bit of experience to go with the youth. I saw the training photos shared on Twitter earlier today and was able to identify a new ('old') face or two. I don't know if they've formally signed deals, so won't name them. Etiquette and all that.

Point of pedantry, but shouldn't they be Vixens?