Ian Radwell died in hospital yesterday morning on the 10 January in Hospital. He was aged 53 and a life long U’s supporter and for a time a steward.
R.I.P. mate
M

bazzer9461 said:
Ian Radwell died in hospital yesterday morning on the 10 January in Hospital. He was aged 53 and a life long U’s supporter and for a time a steward.
R.I.P. mate
Click to expand...

Shockingly sad news, new him well.
Deepest sympathy to Pam and all the family.

Can't place him but always sad to hear of the loss of another U's fan.
M

I worked with an Oxford fan by that name at Memec in Thame about 15 years ago. He was from Thame. I suspect this is the same fellow. Lovely bloke and very sad if it is indeed him. In fact very sad for anyone to go so soon.

RIP Sir,
Gone far too soon. Condolences to your family and close ones.

Do we have any photos of Ian?

Eaststandboy said:
Do we have any photos of Ian?
Click to expand...

I have one which was his profile picture have sent one to the club, spoke to Martin he hopes to have a mention of him in the programme at the Bury game.

bazzer9461 said:
I have one which was his profile picture have sent one to the club, spoke to Martin he hopes to have a mention of him in the programme at the Bury game.
Click to expand... 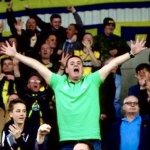 Such sad news. Ian was a good neighbour, passionate OUFC fan and a great husband, father and son. I can't believe he has gone. My thoughts are with all his family at such a terrible time for them all. RIP Ian

Absolutely shocked at this and been struggling all week to think of the words, as I just can't believe this has happened. Especially after only seeing Ian at the Blackpool game the Saturday before last. I hadn't seen him for a while as due to work commitments this season I hadn't made as many games as I'd have liked so I'd no idea he'd been unwell.

Ian was without a doubt one of the friendliest, most down to earth and genuinely nicest people I've ever met and has been far more than just a friendly face at the football over the years. He had a wicked sense of humour and ever since I met him, he was always interested in what I got up to with studying and life in general away from watching Oxford matches and likewise me with him.

We kept in touch via Facebook when I was living in Sheffield and couldn't get to games as regularly and he often gave me some hilarious banter over pictures of nights out and other things that he'd seen on my page. Don't think I've met someone that's made me laugh quite as much in a long time!

This is so incredibly unfair but I feel extremely honoured and privileged to have known Ian Radwell growing up and all these years and going to football again really will never be the same without him there.

Thinking of Pam, Matthew and Harry and the rest of his family.. Love to them all!

I worked the away end at The Manor with Ian and he was a great bloke. Knew his mum to say hi to at games etc.
Condolences to the whole family
RIP Ian
I

Ian was a smashing bloke with an encyclopaedic knowledge of OUFC history, enjoyed his company on match days. Deepest condolences to Pam and Harry and the family
B