2018/19 season is two games in... with the transfer window now closed, and the first round of a proper cup competition 2 days away..... yet Im feeling lower than whale s**t

Our manager has been talking a good job ever since his arrival late last season. He turned the lack of cohesion, passion, and positivity within the first team squad around by motivating a bunch of misfit journeymen assembled under Pep Clotet and the inclusion of some of our young assets to avoid getting sucked into a relegation dogfight, concluding the season a lower mid-table finish (16th place) with 56 points, and a goal difference of -5
Which wasn't an ideal, but ensured we secured L1 football for this campaign, and (for me at least), bought with it much more than blind hope for this season too.

During the close season, KRs interviews with the local media were full of upbeat positivity, a massive clearout of players in the first team squad was a necessity, as was rebuilding the squad. KRs managerial career before joining us was reasonably impressive, winning a promotion the Franchise, then steering Charlton to a playoff place, both his previous teams reaching those achievements by playing exciting, attacking football.

What I didnt expect was the heart of our midfield (Ledson & Rothwell) departing along with Clotets crocks, nor did I expect one of our promising younger, homegrown assets (Carroll) who was capable of covering a number of positions to be dispensed with. Personality clash with our manager I suspect being the main factor- some may cite CCs attitude could well be a contributory factor, yet isnt it part of a manager/ head coaches remit to be able to successfully handle different personalities ? Another of our young prospects, a midfielder who featured in a number of first team matches after Robinson's arrive, who contributed
to the latter part of last seasons up turn in form following the horrendous slump under Clotet, signed a new contract only to farmed out for the entire season.


At the end of last season Robinson assured that he was going to be bringing in his own players and OUFC would be mounting a serious challenge on promotion or at the least aiming to be in the mix for the playoffs. He informed he wanted incoming players in place BEFORE the pre season mini tour in Ireland. That didnt turn out as planned nor as Robinson asserted. In reality, instead of getting business done when he said it would be concluded, the bulk of Robinson's additions have either been one of 5 loanees, and it wasn't till the last day of the transfer window that some of HIS deals reached conclusion.

Cynic though I am, I, until the season kicked off, was filled with genuine hope, an abundance of real expectation and felt that dreaming of a promotion place or at least a playoff place were not a fanciful dream but a distinct possibility.Robinson does talk a very good job, and to me seems to be a master of PRspin. If Robinson ever quits football, maybe he should consider a job in politics as a spin doctor?

Sadly the stark reality of 2 consecutive defeats has battered those early hopes dreams and expectactions that I had for OUFC gong into this season for me, as in battered them so seriously they need to spend several months in ITC at the JR!

As much as it pains me to state, and as much as Id like to see OUFC win each and every match they play, fact is you can't/ won't win them all. While I don't like seeing the U's lose, ever, its the manner of defeat that is a crucial factor. Putting to one side that the referees contributions to both the Barnsley and Fleetwood defeats, were way below standard, its not a surprise at L1 level that match officials are generally pretty rubbish, our midfield was invisible at Barnsley , the defending was questionable and the firepower was akin to a damp squib being ignited in a torrential rainstorm. Yesterdays debacle was a similar horrorshow too.

Im not yet at the point of calling for Robinson to go, two swallows dont make a summer, nor do two defeats, no matter how powderpuff the players performances were, make or define a season. However an improvement in the first team squad performances is imperative, starting tuesday evening in the League cup, preferably. As far as my pre season hopes dreams and expactation have gone, in a very short time , is best illustrated by this ......

Oh dear Sarge, you'll be joining me on St.Giles for a little toasting!

I don't expect anyone on here really knows what happened pre-season but it looks like things did not go the way KR planned. Players out and in does not appear to have got us a winning team. Maybe, just maybe that will change but the signs are not encouraging.

So, cue the positivity boyo's to come along and put us right.

Mid table and a cup run and that would be the best I hope for being honest.
S

My view after the last two Saturdays and transfer window is, I hope, reasonably considered. Last season was a shambles and K.R. did an excellent job of steering us through to safety. Expectations about what would be achieved through the transfer window were inflated by K.R. and not fulfilled. The recruitment for the under 23’s is exciting, the recruitment for the first team less so. I think our relatively recently developing team have been badly exposed by two established sides. There is a clear weakness with our central attacker that can only be addressed by Smith/Obika producing more.
I think we will be OK, but it will be season of consolidation rather than pushing for promotion or fighting relegation. Some pragmatic choices have to be made: Mousinho has to play in front of the centre-backs while the fairly obvious fitness issues with Hall needs to be properly managed. K.R. is still the man for the joe.

In the style of our greatest ever manager Jim Smith, who during his first tenure was reputed to post all manner of motivational notices on the changing room walls pre-match, heres something that may help pre match application of the current squad (starting Tuesday night? ) 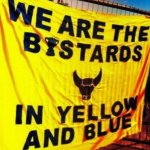 Barnsley were in the bottom 4 at Christmas the year they got to the play offs and beat us in the JPT.

Yes and Oldham lost there opening games and look where they end.....oh

Hopes....we are challenging for a play off place and playing entertaining football at
home at least.
Dreams......we go up as champions and Swinedon get relegated.
Expectations.....mid table finish.

DenisSmithsWig said:
Barnsley were in the bottom 4 at Christmas the year they got to the play offs and beat us in the JPT.
Click to expand...

Not true. Their improved form got Lee Johnson the Bristol City job, Heckingbottom finished it off.

Fail to prepare and prepare to fail. Old mantra but oh so true for us at the start of the 2018-19 season.

The truth is that not anyone on here will really know what went on behind the scenes over the summer but it hasn’t resulted in an effective, fighting-fit unit come the start of the season. We’re still playing catch up with half-fit players and newbies learning their roles.

At the risk of sounding like a broken record, why on earth are we applauding bringing in Holmes and Hanson on deadline day? Top signings granted, but bloody well get them done sooner if your gameplan relies on them. It renders all the prep in pre-season pointless otherwise. Also, signing important players so late in the day comes with the added worry whether those players would be up to speed had they not been loaned out or sold by their parent clubs – do we really know is Smith is match ready from his pre-season at Reading? Mackie certainly doesn’t seem ready yet and Hanson has missed his chance for a debut due to injury.

It’s seriously poor from a preparation perspective and my mind hasn’t changed that this’ll be another ordinary at best season. KR needs to convince us all again.
S

Absolutely agree on the lack of preparation.

In all truth, we are at least a month behind where we should be with a fair few players who KR sees as vital to the first team having had little or no pre-season. That coupled with the team having hardly played any competitive football together, a few who have barely played ANY serious or consistent competitive football in the last year and a number who are on their way back from injury (not to mention the 2 new serious injuries already picked up) and it does not paint a pretty picture. What we desperately need is for this disperate group of footballers to very quickly find a common cause, a sense of purpose and a common identity.

What concerned me most on Saturday was a lack of leadership and lack of communication/understanding on the field roany clear idea of what they were trying to achieve and how to do it. I seriously hope that the senior pro's will stand up to the task and that will improve in time. Only Holmes lead by example and it certainly won't happen overnight, but it is time to earn their corn.

Only 2 games into the season and it already feels like the team needs to adopt a siege mentality to halt the slide, before we even begin thinking of progress. Only then, if they manage to develop that character can we think about what they might be capable of.

Reserving judgement for now as only a loon would try to draw too many conclusions from 2 games. 10-12 games in and we will have a much clearer idea of whether they (players and management) are up to the job, but right now mid-table feels like it would be a serious achievement.
Y

Quote from above: “That coupled with the team having hardly played any competitive football together, a few who have barely played ANY serious or consistent competitive football in the last year and a number who are on their way back from injury (not to mention the 2 new serious injuries already picked up) and it does not paint a pretty picture.”

Jeez, just read that and thought it sounded like Pep’s team from last season. True enough though
T

The preparation argument only goes so far though.

The back four were all in place by July 2nd, and have had an entire preseason together along with the central midfielders who should be providing cover......and the defense has still been poor so far.

I hope that it's just the fact that we haven't had time to play together and 'gel' that has led to such a poor start.
I fear that some of the players that have come in may just not be all that talented.

Expectations are still a solid mid-table finish. But I want to see some signs of progress in August, please, otherwise the worries will kick in.

I'm sure others have picked this up too, but can't recall reading it on the forum. In the last five games we have scored just once in the second half but conceded ten. This suggests a serious lack of fitness in the team.
You must log in or register to reply here.
Share:
Facebook Twitter Reddit Pinterest Tumblr WhatsApp Email Share Link
Top Bottom