Once again a difficult game but hopefully with an almost normal full-strength team.
Glass is half-full so this will be a 2-2 draw. A win would be fantastic.
B

Really looking forward to this one. Very hard to call with our recent Covid issues and Sunderland's injury problems. Like last week, I'd be happy with a point.

Their home record is excellent, a draw would be a fine result.

The only good thing to come out of Sunderland was Auf Wiedersehen, Pet. Jimmy Nail actually goes to watch Sunderland play in one of the earlier episodes.

Hope the game is good for all the travelling fans. Feeling quietly confident today. Full strength squad with the fringe players having recently had a lot of game time.

Narrow but deserved away win 1-2

Would hope we can build on the momentum and resilience created in covid week to get something today, would be a shame to bring back players then lose 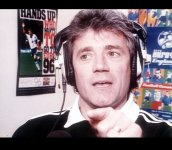 I’ve got to say I absolutely can’t stand Sunderland, having a read of their forum a large number of fans are hugely arrogant, and who could forget the knee slide celebration… There aren’t many teams in League One that I’d really, really like to beat but they’re one of them.

I'll tell you, honestly, I will love it if we beat them, love it!

They have injury woes so who knows, todays result could be favourable to us.

Well I had a dream we won 2-0 last night so hopefully dreams do come true.

My main reason for wanting us to win is to improve our promotion chances, but a close second is wanting to read all the bed wetting on readytogo.net if we do.

I think it says a lot about us that in the absence of many local sides, Sunderland see us and Portsmouth as their rivals now. They know that they're going into a battle, and we will meet them head on.

We owe them for last season. Headbutting Jack Stevens and that twatting knee slide won't be easily forgotten. But we're stronger in every way this season and won't be intimidated by anything they throw at us.

If fit I think we'll start with Moore and Thornily at the centre with Hanson right back and Long left back. Then I'd have Kane, Brannagan and McGuane in the middle. Taylor upfront and Holland on the left, and I'd gone with Whyte on the right. Every time we've played Sunderland we've been at our best when we take the game to them. I'd get in Whyte’s ear and get him believing in himself. If he can show the pace and end product of a couple of seasons ago we can pull Sunderland apart.

A draw wouldn't be the worse result, but I think that we've got enough to sneak a win. I'll go 2-1 Oxford, Whyte and Taylor.
Y

Seeing that we haven't won away at Sunderland since 1994 (and Moody might not be available today) I'm going for a 0-0 draw and would see that as a positive result!
R

If you forced me, looking at their home record, I’d settle for an away win right now.

Also just checking in on Sarge…how are you doing sir?

It’s away days like this that I m really missing paying to watch on iPlayer, the one positive of covid was being able to watch away games, hopefully it’s something the EFL will look at?

They think that they are still Premiership don’t they?
Far far too big for this league and little Oxford?? No?

NO! They f*****g ain’t all that!
They are nothing special at all just a lot of deluded noise and a bang average team so feel free Stick it to em’ boys! COYY!
B

southcoastyellow said:
It’s away days like this that I m really missing paying to watch on iPlayer, the one positive of covid was being able to watch away games, hopefully it’s something the EFL will look at?
Click to expand...