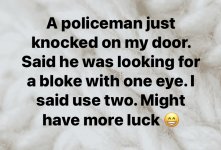 he replied 'No, its a crows shop, come in and have a rook'

At an art exhibition two women were staring at a painting.

The painting was of three very naked, and very black men, sitting on a park bench. What was unusual was that the men on both ends of the bench had black penises, but the man in the middle had a very pink penis. The two women were standing there, staring at the picture, scratching their heads and trying to figure this out. The artist walked by and noticed the women's confusion. "Can I help you with this painting?" he asked.

"Well, yes" said the one woman. "We were curious about the picture of the black men on the bench. Why does the man in the middle have a pink penis?"

"Oh," said the artist. "I'm afraid you've misunderstood the painting. The three men are not African-Americans, they're coal miners, and the fellow in the middle went "Home for Lunch." 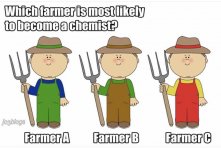 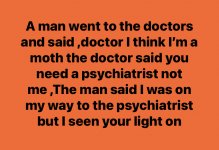 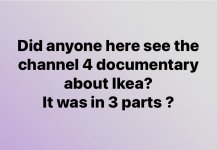 I don't normally make impulse purchases, but this morning I bought a first-aid kit.

Oxymoron said:
I don't normally make impulse purchases, but this morning I bought a first-aid kit.

Should have gone for the "K-tel Home Biopseer" - 9 out of 10 patients say "It's changed their lives". 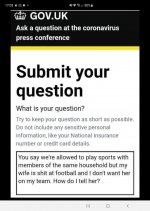 A farmer named Clyde had a tractor accident. In court, the trucking company's fancy hot shot lawyer, was questioning Clyde. "Didn't you say, at the scene of the accident, 'I'm fine,'?" asked the lawyer.

Clyde responded, "Well, I'll tell you what happened. I had just loaded my favorite cow, Bessie, into the..."

"I didn't ask for any details", the lawyer interrupted. "Just answer the question, ...please. Did you, or did you not say, at the scene of the accident, 'I'm fine!'?"

Clyde said, "Well, I had just got Bessie into the trailer behind the tractor and I was driving down the road...."

The lawyer interrupted again and said, "Your Honor, I am trying to establish the fact that, at the scene of the accident, this man told the Highway Patrolman on the scene that he was just fine. Now several weeks after the accident he is trying to sue my client. I believe he is a fraud. Please tell him to simply answer the question."

By this time, the Judge was fairly interested in Clyde's answer and said to the lawyer, "I'd like to hear what he has to say about his favorite cow, Bessie".

Clyde thanked the Judge and proceeded. "Well, as I was saying, I had just loaded Bessie, my favorite cow, into the trailer and was driving her down the highway when this huge semi-truck and trailer ran the stop sign and smacked my John Deer Tractor right in the side. I was thrown into one ditch and Bessie was thrown into the other. I was hurting, real bad and didn't want to move. However, I could hear old Bessie moaning and groaning. I knew she was in terrible shape just by her groans.

Shortly after the accident a Highway Patrolman came on the scene. He could hear Bessie moaning and groaning, so he went over to her. After he looked at her, and saw her fatal condition, he took out his gun and shot her between the eyes. Then the Patrolman came across the road, gun still in hand, looked at me, and said, "How are you feeling?"

"Now tell me, what the f*ck would you say?

Matt Hancock goes to a town & asks the residents what they need. "We've two big needs" said a resident, "we have a hospital but no doctors". Hancock gets out his phone, talks for a while & says "the doctors will arrive tomorrow, what else?" The resident says "we have no phone signal"

When a customer slid into the barber chair, the barber asked him how he wanted his hair cut.
"Make it short," the customer replied, "with a bare patch above my left ear, but longer on the right side so that it covers my right ear. I also want my left sideburn above my left ear and the right sideburn below my right ear."
The barber looked puzzled and said, "I don't think I can do that."

The customer replied, "I don't know why not--that's the way you cut it the last time I was here!"

Her sister had it.

I'll never forget the day I did PE in my underpants at school.

I accidentally added Matt Hancock as a friend on Facebook.


Turned out alright though - I've just been awarded a contract to supply PPE.........

So, a trainee limbo dancer walks into a bar..... 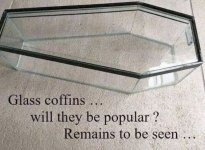 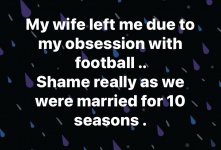